A Day at De Haan Beach and Woodlands

If you have read my blog before, you would know that a day at De Haan beach and woodlands was nowhere on our Europe itinerary. So here comes a post about our lucky goof-up that led us to a place off the beaten track on our well-planned vacation. Stay with us to know more about our story and the place itself.

Did we miss the train or forget to book a hotel, or was our booking canceled?
We decided that we will lay-over at Antwerp for one night and the next morning we will take off right after breakfast. The station was just 2.5 km away from our hostel and we had already booked out tickets on the previous day, so we were all set to reach a new city by mid-day. By this time I was already under the weather and had my first sleepless night due to an itchy throat. The weather forecast was not too encouraging either, but nothing could bring down my zeal to explore and make the most out of this trip.
While we were enjoying the warmth inside the train we realized our mistake, a mistake that we did long back when we booked our hotel at IBIS, DeHaan. Turns out, DeHaan is a place over 20km away from Bruges, and the nearest train station is Oostende, two stations after Bruges!
Thanks to the Euro-rail WiFi we opened the site and booked an online ticket from Bruges to Oostende. The middle-class Indian in me was already sighing at the amount in Rupees we could have saved if we booked a direct ticket to Oostende itself. We were also contemplating how we would manage to see anything if we had to travel 40 km up and down between our hotel and our destination city. As the train arrived at Bruges, my heart did ache a little bit when I saw the IBIS budget hotel right there behind the station. I got the flashback of the conversation we had while booking hotels 5 months back.👇👇 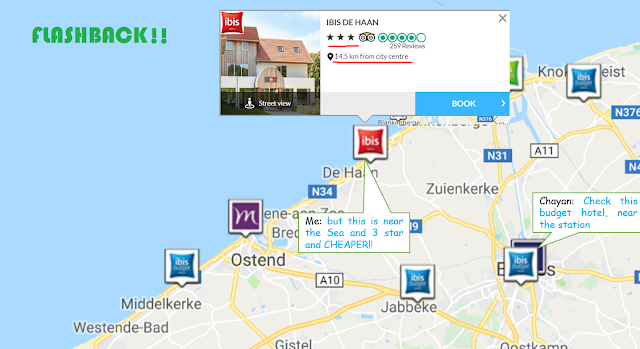 Now the website shows the shortest distance of the hotel from Bruges City center, what it does not show is how to reach there. Without renting a car, which was never on our “budget” plan, the only way to reach this place from Bruges is this (follow the yellow lines on the map above):
Train to Oostend –>Tram to De Haan (frequency one in 45 minutes) –> Walk 1.5 km to hotel
As we reached Oostende we tried to appreciate the beautiful port but couldn’t take many pictures there because we didn’t know where to buy the tram tickets. The people here were not very conversant in English, so we struggled a bit but finally boarded the tram. Another mishap – this time, not our fault. The tram just skipped our stop because there was no one waiting at the station!😮 Till this time we were all upbeat like – “Wow European punctuality, European discipline, what public transport, how organized, Europe’s so Awesome”- but now in our mind, things changed to: “these things don’t even happen in Calcutta, WTH”! Anyway, the polite Indian tourists that we are, we quietly got down at the next station, crossed the road, waited for another tram (which luckily came in five minutes), paid the extra 6 euros and reached our destination. De Haan was love at first sight from the moment we disembarked the bus and assured by GoogleMaps that we are near our hotel. De Haan is a coastal municipality in the Flanders region of Belgium. Words cannot do justice to the beauty of this quaint little countryside, tucked far away from the city – a place where time stands still and a blissful solitude prevail. The tram line cuts across the place such that on one side lies the Dune Woodland and on the other side lies the North Sea of the Atlantic ocean. On our way to the hotel as we were dragging our trolley bags on the picture-perfect road we met a middle-aged Dutch-Belgian couple who greeted us and asked us where we are headed to. I love meeting and speaking to people during our travels, but my introvert nature pulls me back from being the first to strike up a conversation with a stranger. It’s amazing how so much can come up in the first two minutes of meeting a stranger- in those couple of minutes or a little more, we came to know that the man was from the Netherlands but have been living in Belgium for long, that he and his wife have been to Mumbai in India, and they came to know about our Europe itinerary! We parted with the hope to meet again as they wished us a phenomenal Euro-trip. I have reviewed and rated the hotel 4.5/5 in my previous blog “On our Europe trip”. The hotel looked like a resort – with a swimming pool (was not opened then), a garden, an additional pool-side dining arrangement, and large rooms. The location is less than 1km from the beach which lies on the opposite side of the tram station. Adjacent to the hotel is the Dune Woodland of De Haan which we will talk about soon. Unlike the weather forecast for Bruges,  it was a perfectly sunny but windy day here at De Haan. As usual, the receptionist was polite and welcoming, but unusually surprised at how we came without a car 😀
It was nearly 3 pm by the time we freshened up and had lunch at the hotel when we decided to explore De Haan on foot.

Back to the Tram Station The tram station is at the center of your De Haan tourist map. I later found that it is listed among the top places of interest at De Haan on wiki-voyage, so that confirms I am not the only one who found it fascinating. On one side of the station, there is a flight of steps upwards leading to the beach. This is also an amazing photo-point which gives you a great panoramic view of the city. We didn’t know this place had a name, let alone the fact that we were standing on the second-highest dune of Belgium until I checked the wiki. It’s called Spioenkop ( in case you go there and want to search for it on Maps) and is 31 meters above sea level. To go to the beach, you need to ascend the steps to Spioenkop and then descend on the other side. This beach was nothing like what we had seen before. There was only one family apart from us nearby and far away we could see some tourist activity. As I said it was sunny and windy, and at the beach, the wind completely overpowered the sun. I realized that getting into those slippers and pajamas that I was dying to wear at the beach, was not such a great idea after all. Unlike the Mediterranean Sea, which is as calm as a lake, the North Sea has got the waves and the roar. The 12 km long De Haan beach is the longest in Belgium. One side of the beach is throbbing with usual beach activities like paragliding and skiing, while the other side remains quiet, with families sitting enjoying quality time with their kids and some joggers. As you walk towards the west, it gets busier. At the far end in the west lies the only nude beach of Flanders coastline. De Haan beach is the cleanest public beach I’ve been to, so we were not surprised to know that the beach is cleaned daily during the summer when it is the most crowded. Here are some pictures we took there which does capture the unique serenity of the beach but not the feeling. Speaking of photos let’s head to what I consider a photographer’s paradise, our next stop of the day.

The Dune woodland of De Haan

The dune woodland of De Haan is a large natural park covering 152 hectares of coastal nature- with 7 miles of walking track, separate biking and horse-riding tracks as well, this place is a nature lover’s abode. It’s surprising how little is available on the internet about this hidden gem, which makes it all the more important for me to write more about it. The land had three sub-areas – Vlissegem, Klemkerke a Wenduine which are partly covered with forests of pinewood and open spaces of bare sand, moss dune and dune grassland. In the transition to the closed forest, a typical dune thicket has developed mainly with Sea Buckthorn- a special kind of berry plant found in Northern Europe. (Source- an information board at the woodland). This is where you can spend some time bird-watching – nightingales, turtle doves and Cetti’s warbler (tiny moss-colored birds that bear an uncanny resemblance to the endangered Indian sparrow) can be spotted with some luck and patience. The forest management is geared towards developing a structurally rich forest with a large part of the former plantation of conifers and non-regional species being gradually converted to deciduous forests with open spaces while dying trees and deadwood become breeding ground for woodpeckers, bats, and mushrooms. Take a look at the pictures at this peaceful nature reserve. Our De Haan experience was one of true exploration – just walking around and discovering a place we knew nothing about. After a fulfilling walk in the woodland, we stepped into the neighborhood and everything looked like they were waiting to be clicked. I cannot provide much information here because I have none- there was what seemed like a factory, some bungalows and large stretches of grassland and farmland lined with windmills. I can go on describing how I felt, but I’d rather let the video speak for me.
So that was our trip to De Haan – a relaxed country-side experience in the midst of a packed Euro-trip schedule. We did not find any foreign tourists there – the families residing at the hotel were mostly from Belgium and its neighborhood who came there for a weekend getaway. This is slightly surprising given the fact that it is so close to the famous Belgian city Bruges. Maybe the striking lack of tourist crowd is not so bad after all, it is why the place remains so serene. Here are a few more places of interest I found on the limited resources available on the internet, that we did not see. All these can easily be covered in half a day by renting a bike or taking a tram to the next stop.

Once done with all that take a train to the Belgian capital and get back to your backpacking schedule. Check out the things to do in Brussels.

Did you like our off-beat travel story? Do you have any such funny travel story that you want to share? Share your thoughts in comments or mail us at backpacknxplore@gmail.com. We will be glad to read and reply.
Subscribe to the blog to support our endeavor to bring to you more such original stories.