10 Stunning Facts about Hampi You did not know

Hampi is a land soaked in history, a history that glorifies it and haunts it at the same time. This UNESCO heritage site got a new impetus to its tourism when the NY Times ranked it at no. 2 among the best places to visit in the world in 2019. Let’s begin with a few facts you may already know about Hampi.

It is located in Karnataka, a state in peninsular India. It is dotted with ruins of some of the world’s most stunning temples and monuments. These are collectively called the “Hampi group of monuments” which was given UNESCO world heritage status. Hampi is also famous for being the capital of the erstwhile Vijayanagara empire, a kingdom that was synonymous to wealth and prosperity.

These are the few things that I knew about Hampi when I visited it for the first time. As soon as you set your foot in this mysterious land your mind is filled with awe and curiosity. Why are the monuments in ruins? Where are the idols in the temples? Why do we see so many rocks and boulders scattered around? It is my search for these answers that led me to learn more about Hampi. Here are 10 interesting Hampi facts that are unknown to many. The historic antiquity of the region can be traced back to the Mauryan period, in 238 BCE. This is when King Ashoka the great conquered almost the entire Indian sub-continent. The region was successively ruled by some of the greatest emperors in history from the 5th century till the 13th. The Chalukyas of Badami, the Rashtrakutas, the Chalukyas of Kalyana and the Hoysalas (11-13th century) are some of them. Hampi was a holy place for Hindus but was not of great administrative significance in these empires.

By this time the Islamic invaders from middle-east had already gained control in North India. In an endeavor to thwart their inroads to the south, the southern kings came together to form this splendid, most prosperous kingdom of the time – the Vijayanagara empire. They shifted the capital here and ushered the golden era of Hampi.

Hampi was originally called Pampa-Kshetra after Hindu Deity Pampa (another name of Goddess Parvati). It is believed in Hindu mythology that Goddess Parvati led the life of a yogini in the Hemkunta hills of Hampi, to convince Shiva to marry her. So the river that flows alongside the Hemkunta hill was called the Pampa river and the land was called Pampa Khestra. The place was later called Pampe in Kannada and Hampi is the anglicized version of this name. The Pampa river is none other than the beautiful Tungabhadra river where you can now enjoy a coracle ride. Hampi is a historic city, but throughout history, people have considered the place sacred for many reasons. The story of Shiv-Parvati aside, the Pampa-kshetra also holds great importance in the Hindu epic Ramayana. It is believed to be the monkey kingdom Kiskinda, where Lord Ram met his loyal follower Hanuman. The monkey army later helped Rama build a bridge of stones across the sea to help him reach Lanka.

No wonder the stories inspired so many temples and the stone carvings on them. The Hemkunta hill is adorned with temples from the 7th century to the 14th century, mostly dedicated to Shiva and Parvati. The Hanuman temple in North Hampi is dedicated to Lord Hanuman who is believed to have lived here. 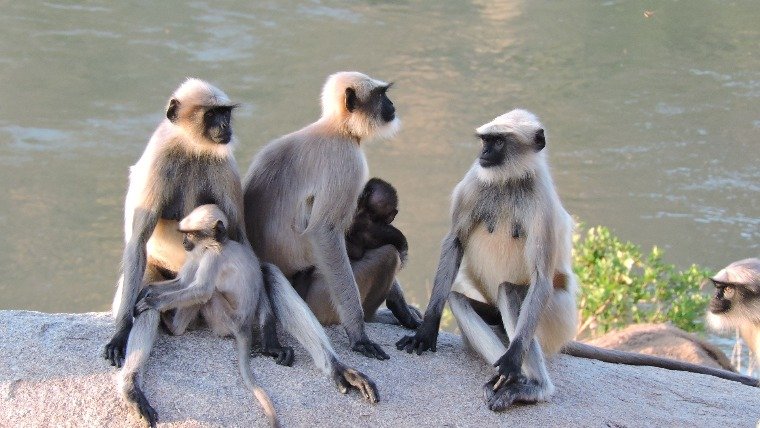 These black-faced monkeys are called Hanuman in Hindi, after Lord Hanuman who was born in Hampi While the breathtaking architecture is its claim to fame, the landscape of Hampi is no less interesting. The first thing I noticed while approaching Hampi was the curiously scattered rocks. The stories behind them continued to drive me crazy as I explored the ancient place. Geologically this region is in the Dharwar Craton. A craton is one of those rare parts of the land that has remained unchanged by volcanic or tectonic movements for many years. By many years, I mean tens of millions, even billions of years! The rocks of Hampi are formed from years of erosion of giant monoliths that existed in prehistoric ages.

Hindu mythology, however, has a different explanation for the same. According to Ramayana, the North Hampi is part of the erstwhile Kiskinda, the monkey kingdom where Lord Ram met Hanuman. The rocks were apparently scattered all over Hampi after a fierce war ensued between two monkey-brothers who fought for the throne of this kingdom. This is how history, geography, and mythology blend into one mystic experience called Hampi.

Coming back to what Hampi is most famous for – the Vijayanagara empire. Spread over 4000 hectares Hampi was the second largest city in the medieval world, next only to Beijing. It was one of the biggest international trade centers in the world in the 14th and 15th century. It is said that precious stones were sold in the open at Hampi Bazaar, besides textile, spices and everything under the sun. This is just a flee market in Hampi’s hippie island. Nothing compared to the medieval markets that used to be

People from different parts of the world swarmed into Hampi for business and fell in love with it. In the Archeological museum of Hampi, you will find quotes from the books authored by several travel writers of that time. It is considered to be the most prosperous kingdom of medieval India, a kingdom that had brought the whole of south India under its fold by 1529.

Hampi Fact 6: How was Hampi Destroyed?

After 200 years of glory, the kingdom witnessed a dramatic fall at the hands of invaders followed by destruction and loot. The Deccan sultans invaded Hampi in 1565 with alliance from some local chieftains and plundered the city for six months.

Historians are often baffled by the rather abrupt downfall of such a powerful empire. It’s argued that the ongoing rebellions from local Hindu Kings like the Nayakas also weakened the defense of Hampi.  That’s why unlike Rajasthan, you will not see palaces and castles in Hampi, all you see are the ruins of one of the most prosperous empires that ever existed. This is also the answer to why most of the temples of Hampi are not functional and do not have any idol inside.

Hampi Fact 7: One of the world’s oldest living temple

While most temples in Hampi are not active, Virupaksha temple is one of the oldest living Hindu temples in the world. Located at the Hampi Bazaar, this marvelous piece of architecture is a temple dedicated to Lord Shiva. It was created in the 7th century, after which it was enhanced during the Chalukya era. The temple in its current stature was built during the Vijayanagara era. Surprisingly this temple withstood the worst attacks of Hampi’s history including the invasion that destroyed the city. Hampi Fact 8: The mint of Vijayanagara

The mint of the Vijayanagara kingdom was located inside the Zenana enclosure of Hampi. It is believed to be the only place where coins were produced and circulated from. You can find many of these original coins with inscriptions of birds, animals and Hindu deities inside the archaeological museum of Hampi. The coins which were the currency of the Vijayanagara empire were made of copper, silver, and gold. Did you know that Hampi is also a great bird-watching destination? During our casual tour of the royal enclosures of Hampi, we came across many rare species of birds and reptiles. We also found squirrels in abundance. But that’s not the only wildlife you are going to see here. The Daroji wildlife sanctuary located only a few kilometers south of Hampi is home to the endangered Indian Sloth bear.

Apart from the bear, you can also find antelopes, peafowls and an impressive range of flora and fauna. It used to be a barren hillock like the rest of Hampi, but with commendable efforts of the Karnataka government, it has now been turned into a green oasis. The stone chariot of the Vijaya Vittala temple of north Hampi may be the icon of Hampi, but there are more surprises inside. Enter the gates of the Vittala temple complex and step into the temple with musical pillars. You read it right. When tapped softly at the right places music emanates from these pillars. They are also known as the SAREGAMA pillars for the same reason. Hindu temples were not just sites of worship but also the center of art and education since time immemorial. Since dance and music are an integral part of the religion it’s not hard to imagine classical dance and musical performances enchanting the hall of the temple here. So these are the 10 most exciting facts about Hampi according to me. Experience Hampi on your own to discover a different side of India.

Check out our perfect Hampi itinerary to plan your trip. You can also combine this with a trip to the temple of Lepakshi which was built during the era of the Vijayanagara empire. If you are into UNESCO World heritage sites, then you will also like Mahabalipuram, a treasure trove of ancient architectural wonders from the 7th and 8th centuries in Tamil Nadu.

I recommend this 2-day Hampi tour from Goa if you already have Goa in your India itinerary. Disclaimer: Backpack & Explore owns all the pictures and the content of this post unless otherwise specified in the caption itself. Please do not copy any of these without permission.