Durga Puja in Kolkata – 5 Reasons why it is Unique

The travel blog has given me the wings to fly back to places all over the world, but I realised that there’s little on my blog about my roots, my beautiful Bengal. So today, let me introduce you to a piece of myself, my home, West Bengal. And what better way to start that than with Bengal’s biggest cultural extravaganza and one of the world’s largest carnival of Art– Durga Puja. Fun, family- union and celebrations are the common theme of festivals all across the world, but each festival is also unique in their own way. So let me delve into the memories of my childhood and the essence of my adulthood to explore the most distinctive aspects of this serendipity.

Women in white-red Saris putting Sindur  on one another and people dancing to the beats of Dhaaki while carrying earthen-pot filled with burning coconut husk in both hands – this is what comes to the mind when you think of Durga Puja, thanks to the  cinematic depictions. Durga Puja is all that and beyond.. #PujoIsComing

Before that just a quick background, especially for my international readers.

What is Durga Puja?

Simply put, Durga Puja is a  Hindu festival of worshipping Goddess Durga – the Mother of Mortals and the Destroyer of the Evil. She symbolizes the power of a woman, a mother who is often looked upon only as a nurturer. Yes, Maa Durga (Mother Durga as we call her) is a nurturer but She is also a Warrior and a fierce Protector. She lives with Her family and comes to the earth to meet Her mortal children every year during the fall. This is when Bengal gears up to wish her with the blue autumnal sky, white clouds floating like cotton balls in the air, vast stretches of land covered in white ‘Kash’ flowers and fragrance of ‘Shiuli’ all around.  This also stems from the mythological story according to which the Goddess was actually born in the earth and she left her parents to settle in Kailash after her marriage. Just to clarify that this is the version of the story that is accepted in Bengal and as a part of the Bengali culture. The actual religious context of Durga Puja also celebrated as “Navaratri” in other parts of India is different. And that is what brings us to the first point on our list. 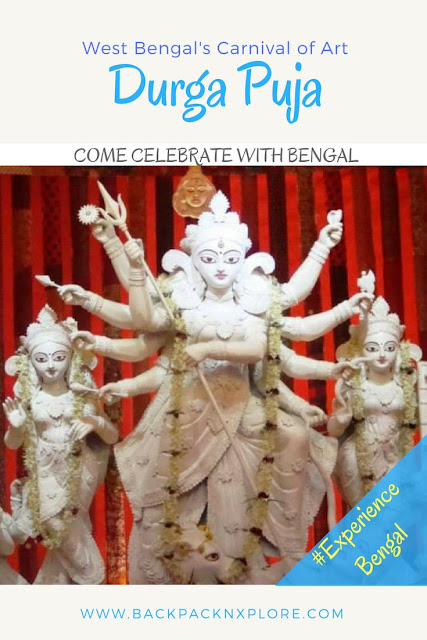 # 1 The Story of Durga Puja and real-world symbolism

You might have noticed that the story we linked to the Goddess has an uncanny resemblance with our lives. The story of the return of the Goddess intricately blends with the human emotions of a daughter leaving her parents for a marital life (or for a job in the modern context) and returning home with her children to spend a holiday. Growing up, we connected this story with our mother who could visit her childhood home with us only once in a while during holidays.

The Goddess has ten hands, which is also symbolic of the multi-tasking ability of women all over the world. The symbolism is not too spiritual or religious, rather universal feelings that people connect with irrespective of their religion.

Over two months ahead of the festival the local newspapers and other publication houses come out with their 500-to-1000-pages-long magazines, called “Pujo Shonkhya” (special Durga Puja covers). So if the Durga Puja is in October, we would start enquiring about the Puja editions from the end of July. These editions include magazines for children, young adults, and adults, and comprise of select literary work by best authors of the generation. The Puja editions are as important as the Puja itself because the love for reading and writing is the common chord connecting fellow Bengalis across the world.
Okay, so far so good, but what about cartoons? What kind of religious people like to draw cartoons of their Gods? Well, we do! We love Ma Durga, and we love to see Her as our own mother, Her family as that of our own, we love to personify the Deity. Our Goddess loves to be a part of our lives and she is never offended by the display of affection through Art.

Mahalaya marks the beginning of the 10-day ritual of Durga Puja. The actual Puja (worship of the Goddess) begins from the 6th day after Mahalaya. Every year on this day my parents, my religious mother and my not-so-religious father would wake up at 4 am on this day and switch on the radio to wake us up. The All India Radio still airs an 80+-year-old recording of a program which was created in 1932. The one-and-half-hour-long Opera-style audio show is best described in the words of journalist Shikha Mukherjee as “a serendipitous combination of the ancient and the modern, of the orchestra, chorus (in plain Bengali) and Sanskrit chants”, which is easily the longest-running show in the world.  Since the date of recording, the entertainment world has undergone revolutionary changes and several attempts have been made to modernize the show titled “Mahisasur Mardini” (Destroyer of the Evil) but they all fell flat on their face. So irrespective of the generation gap between me, my mother and my late grandmother, our opinion on this particular matter remains the same – “The program is uneditable”. There is something about the chants that fills my heart with wonder and causes goosebumps even in a cynic like me.

# 4 The Pandals and the creative extravaganza

The current form of community Durga Puja was started in 1790 by a group of 12 young men who raised funds from neighbors to make a temporary stage (called Pandal) and conduct the festivities for all. Over the years Pandals have turned into a stage to showcase the artistic glory and creative genius of Bengal.  The puja committees earn a lion’s share of money these days from corporate firms all over the world who find it a worthwhile marketing investment. Take a look at these stunning pandals and try to imagine spending a whole night exploring a multitude of these, each with a different theme and design. Then try to digest the fact that these are temporary structures which would have to be dismantled in a week. 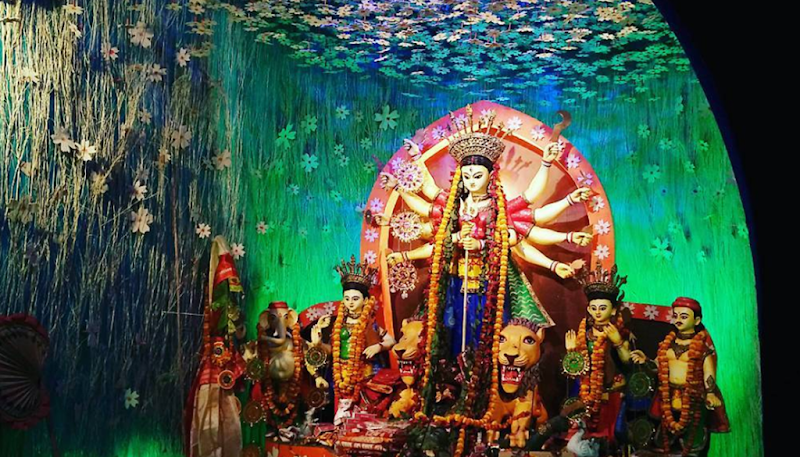 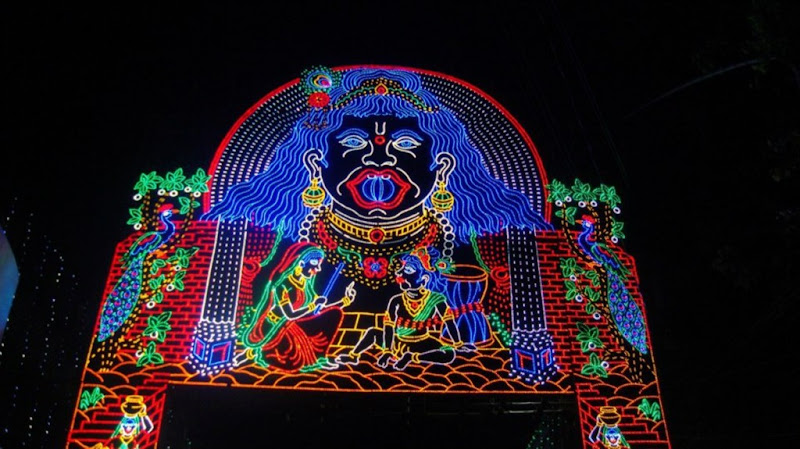 Lighting Extravaganza on the streets

The entire city of Kolkata comes alive at night during Durga Puja. With an average footfall of 2-3 lakhs in each of the prominent pandal every single day of the 5-day event (which easily extends to 7-days every year), it is easy to forget the time when you are out in the streets during Durga puja. People are out in the streets not for some religious procession but for pandal-hopping, meeting old friends and families and chatting all night at Maddox square. This is not the nightlife of clubbing and dancing, this is a unique kind of nightlife that has been in place for decades now.

Ok, so this is an extra point beyond the 5 I promised. The big question on Durga Pujo – “Kota notun jama holo?” (How many new garments did you get this  Puja). You see, exchanging gifts with family and friends is a common thread among many festivals like Christmas and Diwali but for Bengalis, that gift has to be a garment. Because in the end the count of garments matter. Even families with limited means would go extra miles to buy their children multiple new dresses during Durga Puja, even if it means stocking them for the rest of the year. I am not a shopaholic, in fact, the opposite, but I will shop for Durga Puja, for the family as well as for myself. If there’s a sale going on at some part of the year, I’d buy a new outfit and keep it tucked away in my wardrobe with tags on. Because when the pujo comes and I unwrap my new dress, I want to smell the freshness. If I wear the dress even once on any occasion, the dress becomes old for Durga Puja. So while I am completely fine with wearing my oldies till they tatter, on 5 days of Durga Puja, I need 5 different outfits. For those who think it’s an extravagance, it’s not really so. Because in the markets of Kolkata you can still get a quality kurta for Rs.150 and even bargain on it!
I didn’t mention anything about the religious rituals here, because every festival has rituals unique to their own. What I wanted to discuss is some of those quirky little things that make this one of it’s kind, and one that you have to experience once in your life! Read this post for a complete guide to Durga Puja including some important religious rituals. There’s another post that explores the background and critique of this form of the festival.
So do you look forward to joining us in Bengal this October during the Carnival?
Pin the image below to save the post for later! Like most Kolkata people, I applied for my leaves and booked my tickets way in advance because Pujo cannot be missed. What is your favorite festival and what’s unique about it? Share with me in the comments!! If you like this subscribe to the blog to follow my journey to explore life through travel. You can also follow me on Facebook and Instagram for some daily dose of inspiration.
Tags:

Previous Article
Bandipur Safari – Tryst with the Tiger
Next Article
Bangalore to Gandikota and Belum Caves – A mad day trip!