Bandipur Safari – Tryst with the Tiger

September 1, 2018
Bandipur Safari is by far one of the most ethical  jungle safaris available in India, and also one of the most favorite things to do for people in Bangalore on weekends. This densely forested area is the gateway to many popular hill stations nearby – Ooty, Kodaikanal, and Wayanad to name a few.
Once the favorite hunting ground of the royal families of Mysore, this is now a safe abode for the wild – elephants, antelopes, spotted deer, peafowls, and many other native species including the majestic tiger. Bandipur along with three regions – Nagarhole (also in Karnataka), Wayanad (Kerala) and Mudumalai (Tamil Nadu), form the largest Tiger Zone of India both by area and by number (an estimated 570 tigers in the zone, most of which is in Karnataka).
The jungles are interconnected though administered separately by three different states – an exemplary inter-state collaboration for wildlife protection. My love for the Western Ghats of India is not a secret, so every time we went on our regular weekend escapades in search of some hidden gems in the bejeweled crown of the Nilgiris, I always hoped to see just a glimpse of a tiger, or cheetah or maybe a panther. We’ve seen a flock of delicate deer roaming around us in Nagarhole and the wild elephants on their own family picnic on our way to Ooty, but never had the fortune of tiger sighting – not until we booked a serious 6-hour safari with the Jungle Lodges. 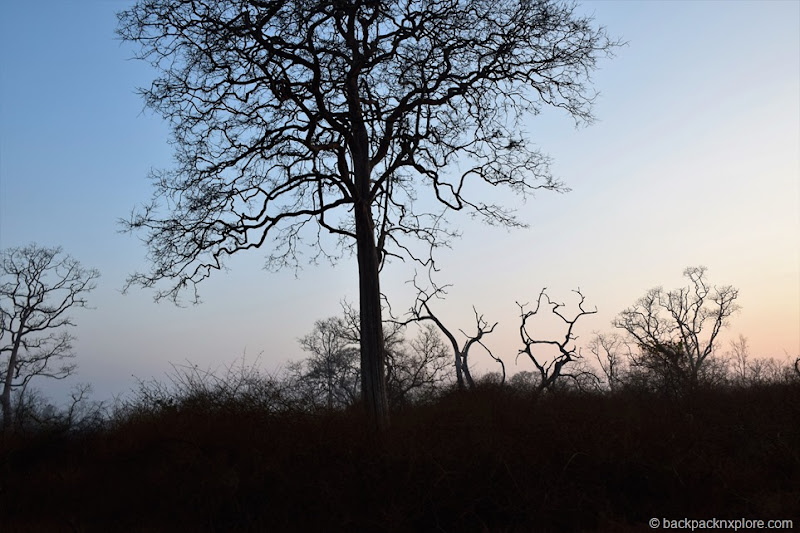 Did you know? India is now home to 70% Tigers in the world!
Check out four other amazing forests in India for a wildlife safari.

Our Experience at the Jungle Lodges

Envisioned by the former Chief Minister Late Sri Gundu Rao, Jungle Lodge Resorts group is a Public-private partnership (PPP) of the Karnataka government and Tiger Tops. Started in 1980 with the eco-resort at Kabini it happens to be the first eco-tourism venture in India. They have quite an impressive website which has details about all their resorts in Karnataka and the different packages they offer. The packages are usually at the per-person level and not per room.
We started from Bangalore at 7:30 am on a hot Saturday in March and drove about 220 km to reach the resort at 1 pm. For those not aware, March is usually the hottest month of the year in Bangalore with temperature often crossing 35 degrees, incidentally, it is also the best season to see wildlife in Bandipur.
To our pleasant surprise, the drive was smooth, no traffic congestion, a fantastic road which helped us drive 250 km in a little over 4 hours including the breakfast halt. We were greeted at the reception where we were they explained to us the full itinerary – it seemed less of a holiday and more of a project! Here is the briefing for you

-Lunch at 2 pm
– Bandipur safari for three hours starts at 3:30 pm
– Evening snacks to be served after we return from the safari between 6:30 pm –7pm
– One-hour wildlife documentary to be screened at the theatre at 8 pm
– Dinner starts at 9 pm
– Next morning wake-up call at 5:30 am
– Morning tea and start of another three-hour Bandipur safari at 6:00 am
– Breakfast to start at 9 am
– Check-out 11 am


This was the full package that amounted to Rs.7500 per-person for a two-bedroom cottage nestled in a beautiful green forest-like setting.
All the cottages had exquisite wall paintings of wild animals that live in the Bandipur jungle – sloth bear, elephants, deer, leopard among others depending on the name of the cottage. We had a life-size leopard on our wall! Rooms are clean and spacious but do not have TV or AC (eco-tourism, remember?).
There is a cooler instead but because of the greenery and architecture of the cottages, it was quite cool inside the rooms and we didn’t need to use it at all. With the packed schedule of events that we had, there was no time for TV either. We quickly freshened up to make the best use of the little buffer time we had before lunch, to experiment with our newly purchased Nikon DSLR camera. 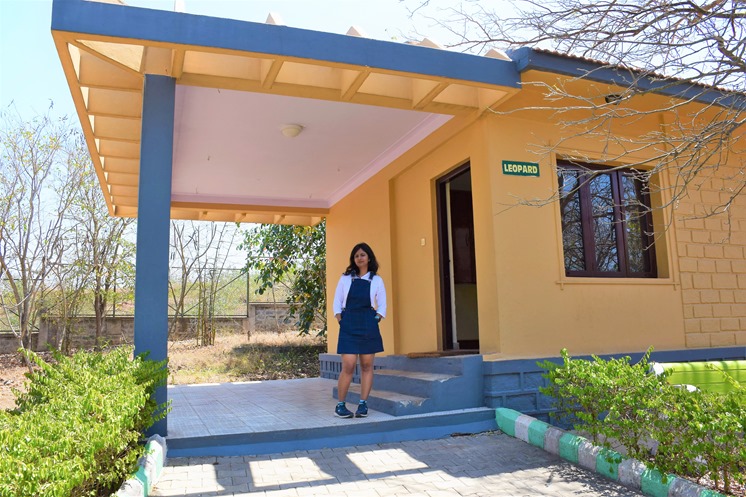 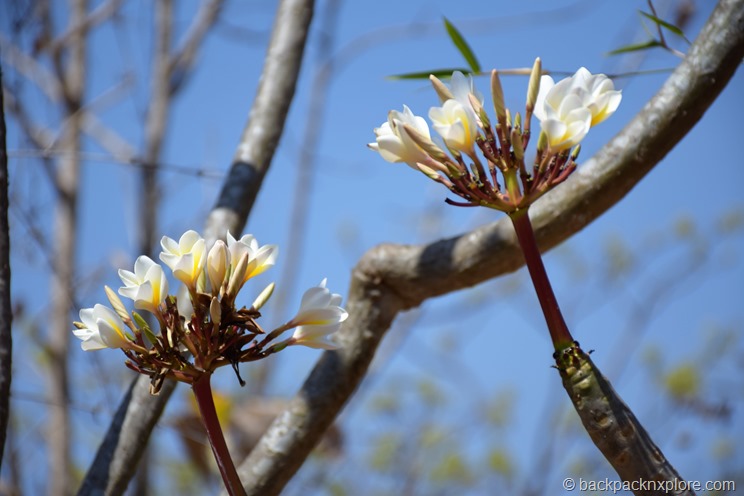 The Bandipur Safari – How we met the tiger

After a wholesome lunch, I changed into darker shades as instructed for Safari and we took off for our first safari scheduled for 3:30 pm to 6:30 pm. We looked like the most under-prepared idiots out there among the experienced wildlife photographers. They had caps, masks, sun gloves, 200mm/500mm lenses and I even forgot my hairband  (rest of the things were not even on our packing list).
We were already burning in the scorching sun and knew difficult times were ahead in the safari. As the jeep roared past the roads into the depths of the jungle, the thick canopy relieved us from the sun but the dust took over and clogged our nose already. That couldn’t stop us from enjoying the rich flora and fauna of the jungle, the experience of raw nature.
At this point let me delve deeper into why tiger sighting in Indian jungles is way more difficult than sighting lions in Africa. It’s the elusive skin of the striped beauty and their preferred terrain. Lions usually live in the deserts which have light vegetation, meaning clearer vision for photographers or even normal travelers. The Tigers, on the other hand, live in dense forests and their skin helps them camouflage with the trees. All the jeep drivers in the safari are also experienced forest guides and they know how to follow the sound of birds and track the trails of a tiger. About an hour into the safari we spotted a dash of striped skin blended with the bushes, from a distance of at least 150 meters.
We waited there for almost another hour till she woke up, watching some rare birds including the magnificent peacocks in the meantime. As we waited like the paparazzi with our cameras (without flash) we saw the tiger wake up finally, do a few stretches and then just fade into the jungle. Our 18mm-140mm camera was not good enough to take the perfect pictures of the tiger but we managed to capture the beauty of the jungle and the glorious sunset.
By the time we returned it was already 7 pm and we had only 1-hour break before the documentary was about to start. I was having a headache from the long journey of the day and had decided that I might as well fall asleep in the theater because what else you do when you watch a documentary. Turns out this was the best movie I had watched in a long time. Shot over a period of several years at Bandipur jungles, tracking the different phases of the life of a tigress – how she grew up, how she found friends and foes- we were invested in her right from the beginning.
After this completely fulfilling experience, we had dinner, tried to self-train ourselves in night-mode photography, failed and retired to our cottages. We had to have a good night’s sleep after all as the wake-up call was at 5:30 am. next morning. 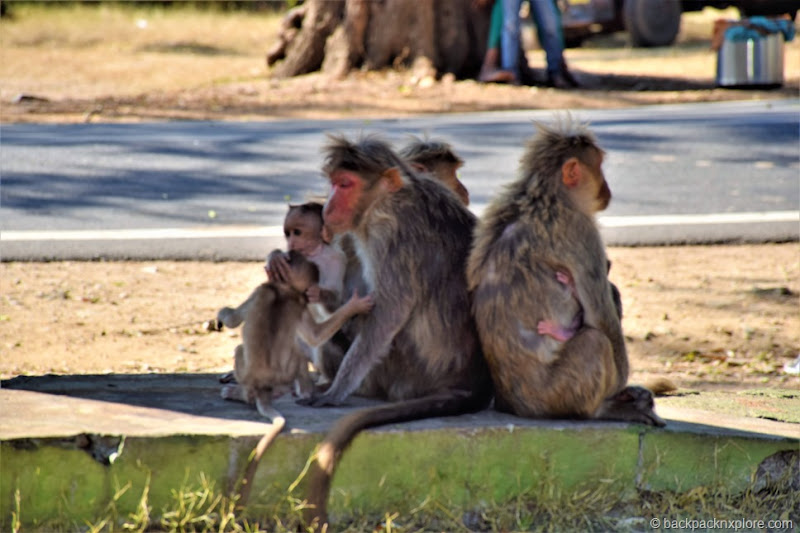 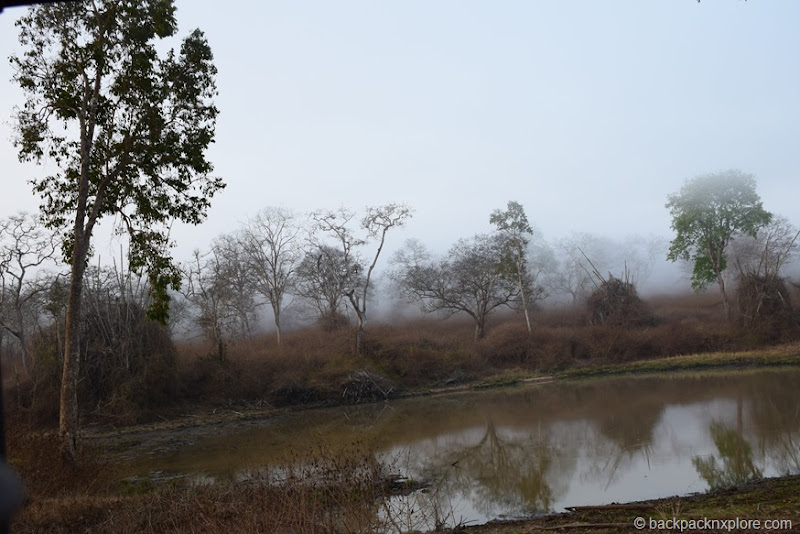 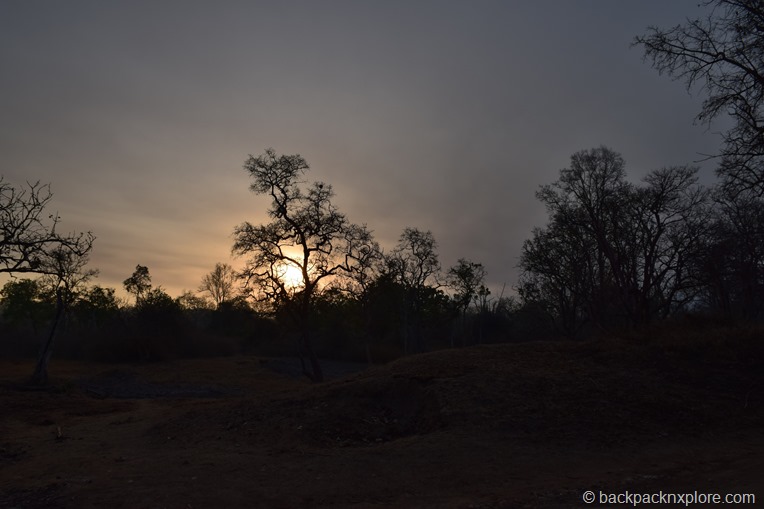 Last day we wrestled with the heat, and today was our tryst with the cold wind of early morning as we breezed past the highway into the jungles. Yes, we didn’t bring stuff to protect us from the heat and dust, neither did we bring even a jacket for the cold. Throughout the safari, we kept following a tiger’s trial closely and followed the sound of birds but failed to spot the striped beast. I know it sounds exactly like hunting, except we were a different kind of “shooters”.
We met other groups on our way who were delighted to show us the shots of the tiger drinking water from the lake. This was turning out to be the most boring experience I could imagine, just sitting still in a jeep at some part of the large forests, with the hope of seeing something. This is what’s meant to be a wildlife photographer I wondered, while I was convinced that nothing good is going to happen while just waiting here and we should just take off.
We did see some peafowls and monkeys, but if you live in India, the sight of monkeys is not as exciting as it might sound. With an empty heart, we set off to leave the forest when right there in the middle of the road just 5km away from the exit sat the tigress. It felt as if she was playing the Diva and we were those page3 photographers feeling blessed in the presence of Mademoiselle. There she was basking in the sun in the morning sun looking at us and then turning around uninterested.
People with those long lenses started shooting her, and comically they indeed looked like snipers in action. We were in an open jeep, unarmed except with our cameras and binoculars, standing a pounce away from the mighty tigress – but there was no fear in our hearts, only awe and the joy of this golden rendezvous. Yes, we managed to take some pretty satisfactory pictures as novice photographers as well! 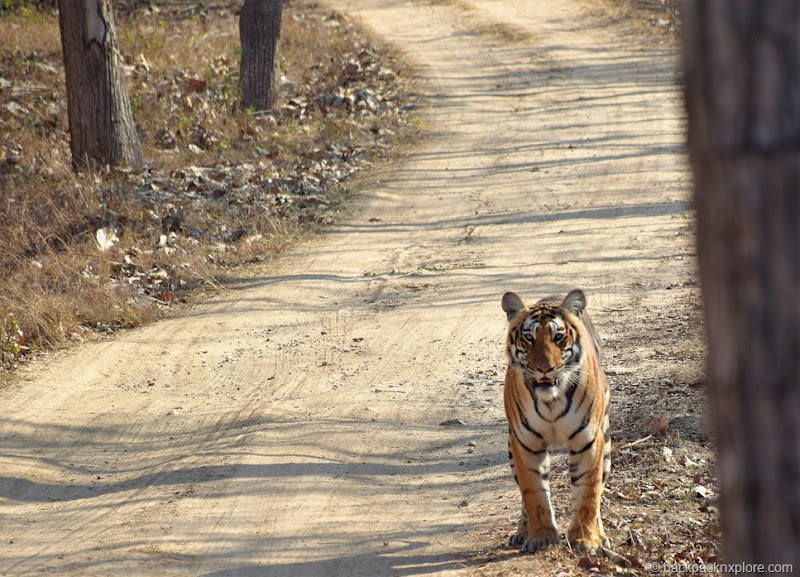 Posed for the perfect picture to make the Paparazzi happy 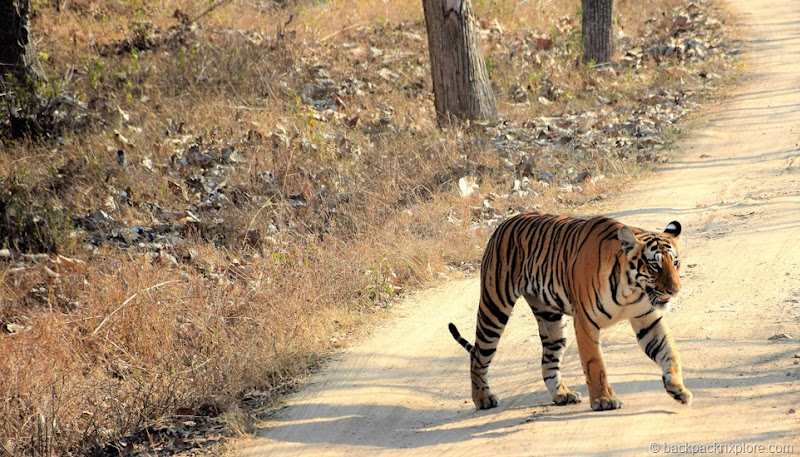 And then she cat-walked her way to the wilderness

For more wanderlust in Karnataka check out our the ultimate Karnataka Bucketlist.
Love wildlife? Read about Masai Mara Safari in Africa.

-Wear Darker colors and don’t look “Glossy”.
-Never, never use flash while taking pictures in the jungle. Come home and do some edits on Windows Photos. I did the same with the pictures here and they turned out pretty well. You don’t need any photoshop skills for that
-Don’t try to feed the animals because you don’t know what can cause them harm
While in the jungle maintain silence as much as possible. I know this part is difficult given the excitement, but it’s worth it! 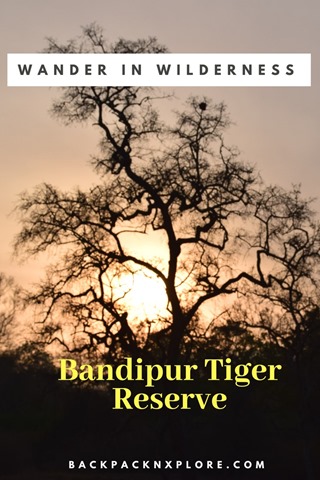 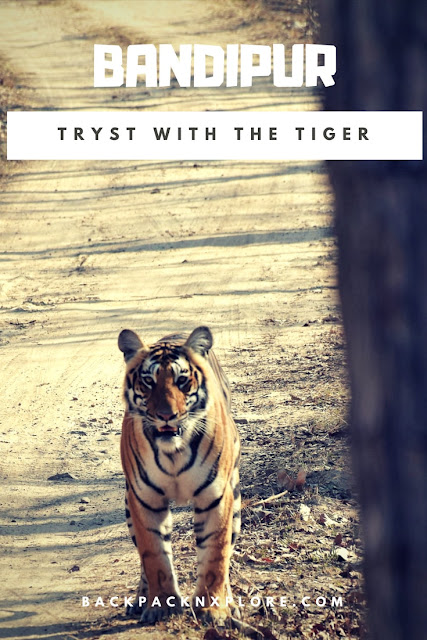