October 28, 2018
My post comes after a more than usual break because I was in my hometown last week for Durga Puja- the biggest revelry for Bengalis all over the world, and the greatest spectacle of my city Kolkata. I had given you a glimpse of what this festival is all about and if you have read it, you would know what to usually expect. Art is more than just a feast to senses, from time immemorial, art has been a tool to social reforms and revolution. The European renaissance is probably the biggest example of the power of Art, a subject most neglected in a world that looks up to science as the source of all development. Durga Puja 2018 was, as usual, a celebration of art, but it will be remembered for the themes that were chosen, the powerful endeavors that were made to drive the message of human rights and inclusiveness.  With the city decked in lights and artistic “pandals” (marquee), Kolkata is nothing short of an open-air art gallery with free entrance to all. In this post I will be reviewing this year’s festivities- how did it go, what new things happened, what was the overall ambiance. 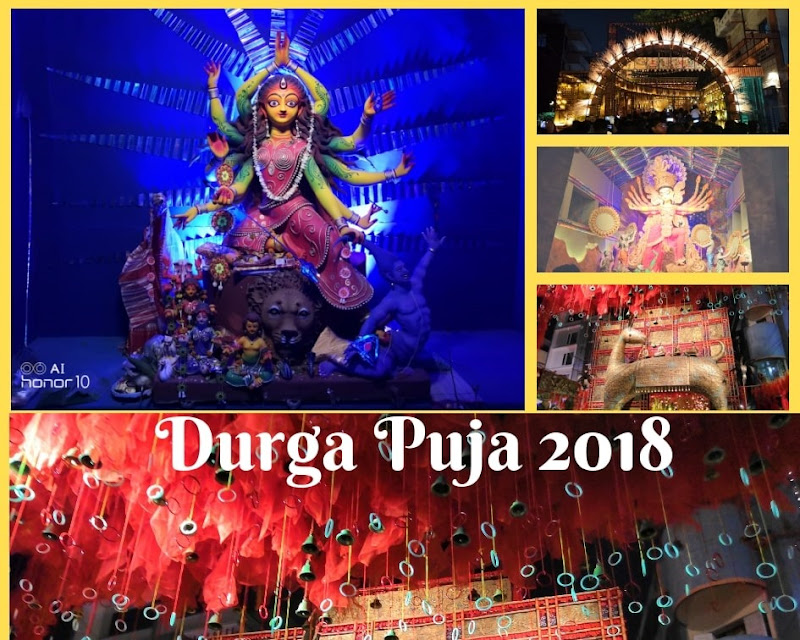 The Street Art – A new development in Durga Puja 2018

In 2017, there was a new addition to the carnival of art, as 400 people joined in to create the longest floor painting (“Alpona”) to welcome the Goddess, just a few days before the Puja begun. A kilometer long colorful alpona was formed with traditional patterns of any Puja and was unveiled with a lot of pomp and grandeur befitting the glory of the Goddess. However, this time the people of the city stunned us with another street art 300meters long, which was based on a rebellious theme – “the life of sex workers”. If you have been to India you would know that this is a slightly conservative part of the world – everything happens, but you cannot talk about all of it. “Prostitution” is one of those taboo topics, but if you think upholding the fundamental human rights of sex workers on an auspicious religious festival was far “too much”, you couldn’t be more wrong. Do you know that when the idol of the Goddess is made, it is mandated by religious rituals to get a handful of soil from the hands of a sex worker? Symbolically it means God is in everyone, from the mainstream to the marginalized. No idol could ever be made without the soil from a prostitute’s door, yet they were barred from stepping into any altar or participating in any rituals. Lot of work, in theory, and practice has gone in to establish the inclusiveness which was de-facto in the 2000-year old religion, and this street painting was another attempt to bring equality and inclusivity in our society.

During my “puja parikrama”, a term used to describe the self-guided pandal tour of the city, I noticed the resounding theme of social issues being raised. Not that it never happened before, but this year, the pretty themes like famous temples, castles, and gardens were far outnumbered by an abstract representation of the society we live in. The themes ranged from unity, accessibility, diversity and even the most disturbing ones like child abuse and violence towards women. Here are my favorites from what I could see with my own eyes and what I saw on TV (since it is not possible to cover all 4000 of them).

The street graffiti I mentioned leads you to this pandal. This pandal in north Kolkata paid a tribute to the sex workers of Sonagachi, Asia’s largest red-light district, Kolkata’s open infamous secret. Kolkata’s red-light district is nothing like Amsterdam, it does not appear in travel blogs but in newspapers – for crimes, police raids and poor living conditions. In India prostitution is illegal, so even if women are beaten and exploited, their complaints don’t hold value. Unlike the street graffiti, the art-work in the pandal was more direct in expressing what they wanted to say. The plight of prostitutes, marginalized and hated in the hypocritical society, was brought out in the most heart-wrenching way. One of the artists explained in an interview, that a lot of women get into prostitution due to sex trafficking or to earn a living for their family, they have a family, they too are someone’s daughter, someone’s mother. They deserve a life of dignity like anyone else. 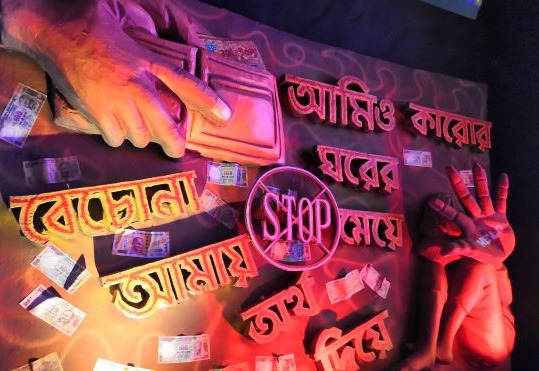 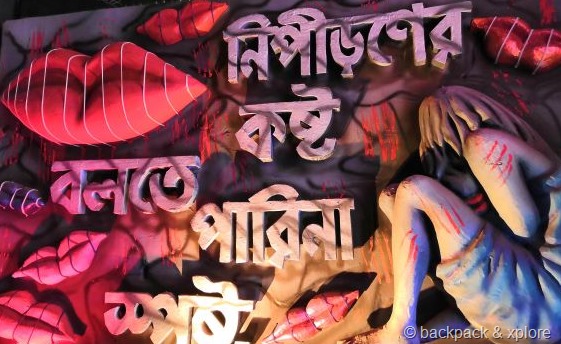 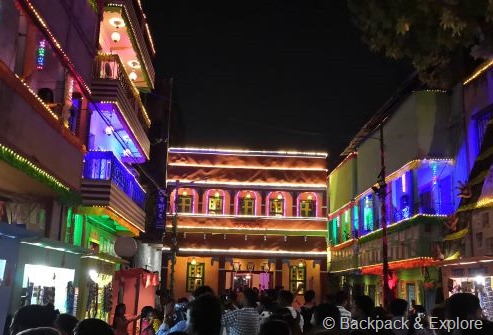 With the theme “sob choritro Jalopnik” meaning “all characters are fictional” the pandal was decorated with Adhaar Cards of fictional women. Well not really fictional, they used pictures of the women of their locality (with permission of course) to create Adhaar card replicas that hung from the ceiling mysteriously, while pictures of famous successful women from all over the world adorned the walls. The theme as explained by the creative head was a tribute to women from all walks of life – the famous powerful ones as well as the common faces among us, each woman is special and fiercely protects her family from all ills. That’s what Ma Durga is all about, that’s what Durga Puja is all about.

This one is closer to home, my home in Kolkata and has never failed to surprise people with innovative themes. This year they chose to bring up another important theme – treatment of parents in their old age. In our society mothers are held in high respect, we call Goddess Durga, Maa, meaning mother. The news of growing ill-treatment of the elderly people by their children is not unknown. Well, it’s not just torture and humiliation, which are purely crime, but also neglect. We owe our lives to our mother, she provided for us even before our birth and she raised us with all her care, but when we grow up we often forget her importance, and sometimes even her existence. Old people are being left alone waiting for a phone call from the children they once raised, an annual visit that never happens, to see the face of the grandchildren who they wanted to play with but could never meet. We found the 3-D model of Kolkata city on the ceiling as we entered the pandal, something that left me awestruck with its details, but I couldn’t really connect to the theme. I teared up as I walked into the room full of newly bought garments, placed one after the other, by a mother who waited for her son to visit her in Durga puja every year, but he never came. At the end of the room was the replica of an ICU, where the mother was fighting for her last breath, alone. The idol here was the most beautiful realistic replica of a Bengali mother, wearing a white sari with red border carrying her youngest son Ganesha in her arms. 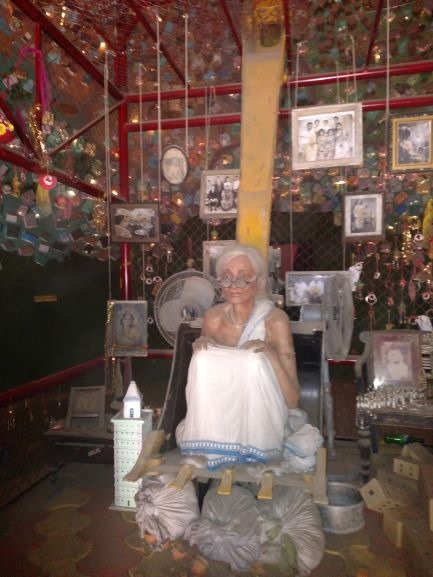 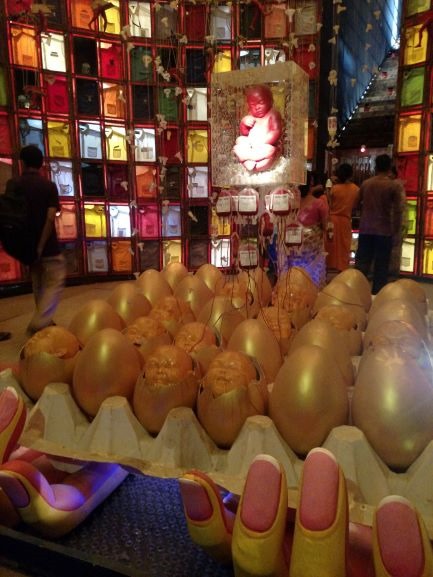 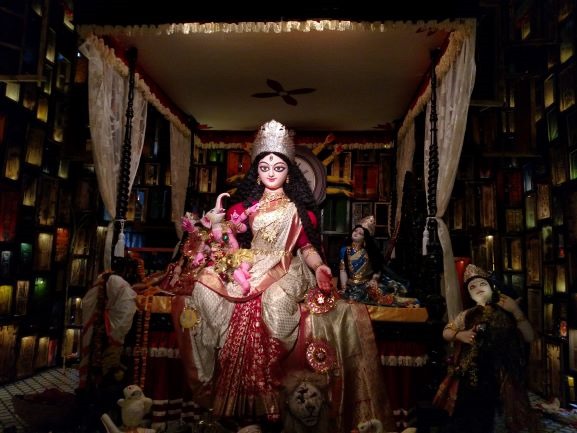 Purely from an artistic excellence, this was one of the best puja pandals I have ever seen. The theme was on point was Andaman and its natives. Andaman is a scenic island-state in the Bay of Bengal, whose natives live the nomadic life in forests. The statues were so realistic that in the crowd you could easily mistake them to be real people. The choice of theme is significant in the fact that in a country obsessed with light skin, Goddess Durga has always been imagined as a woman with fair skin.  Ma Durga as the fiercely beautiful goddess of the forest, who has a dark complexion like the native islanders. The statues of the people from Andaman were so realistically carved that one can’t help but awe at the kind of effort people undertook to create something temporary. The theme music being played made me feel like I am in a village in the Andaman island and could hear the waves splashing in the distant shoreline. I did not visit this one despite my strong intent. The puja organizers here came up with the most unique theme, a pandal accessible for the visually impaired. Over 12,000 pins were used to create the huge Durga idol to help the bling touch and feel the structure. Just as the people can see the pandals being made and the city slowly transforming during the Durga Puja, the sound of sawing and hammering nails brought the Durga Puja vibes for the visually impaired. The walls of the pandal had artwork in a thread and some chants like “Jai Ma Durga” written in braille. The committee also organized eye donation camp in the Puja premises
So these were the top 5 pandals in my eyes. Beauty is relative and I’m sure my choices will be debated by those who witnessed this year’s puja. Some of the other notable pandals were the Sribhumi Sporting club which recreated the Palace of Chittorgarh from the sets of the period film, Padmavat released this year, Santosh Mitra square where they created a Chariot made of real silver worth 40 crores, Bengal’s rural “Dhokra” art showcased by the Mudiali club, among many others.

The foot-fall and the traffic in Durga Puja 2018

This year over 4000 pandals was raised in the city with cumulative expenditure estimated as 123 Cr. (Source: TOI). Most of the budget comes from sponsorship that flows in from big corporates. This year the picture of the famous Padmavat-themed Pandal was posted on social media more than 10 days before the Puja commenced. This shows the kind of enthusiasm in the general public about the festival. Kolkata metro recorded the highest ever footfall in 34 years with 9.11 lakh passengers using the service on 15th October (Shashti- the first day of Durga Puja). The Heritage Puja committee Baagbazar Sarbojonin completed 100 years this year and drew more crowd than ever. Due to the tragic incident of Majherhat bridge collapse a month before the festival, the major connectivity of South Kolkata broke down. However, alternative routes were well maintained and the traffic management deserves an accolade. Every time I was out there on the street I couldn’t help but respect the traffic police for the sincerity and dedication with which they served during those days.
Visiting Kolkata? Don’t miss a trip to Jorasanko Thakur Bari, the house where the great poet Rabindranath Tagore was raised.

The weather in Durga Puja 2018

The weather this year was a superstar. The Puja season is supposed to be marked by clear azure sky and smell of the Shiuli and sight of land covered in white Kaas flowers. However, every year since I remember, at least one day (or more) of festivities is marred by heavy rainfall. Despite the weather forecast of cyclonic rainfall ahead of Puja, which did happen for real, the sky magically turned bright and sunny on 15th October and remained that way till the end of the Durga Puja. This was indeed special, hence I had to give it a special mention!
So this was my review of Durga Puja 2018. Did you witness the Durga Puja this year? Are you inspired to witness it the coming year? You know the puja committees have already started planning the themes for next year as we talk. Because Durga Puja is coming, in 346 days 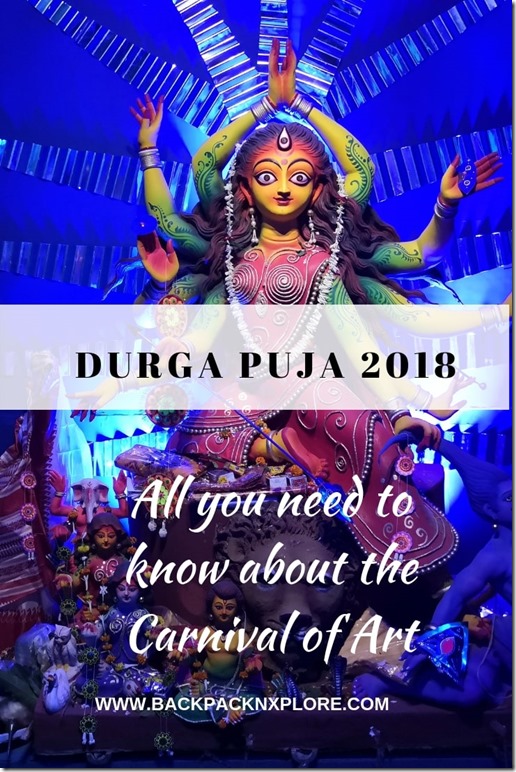 Read more about Incredible Indian experience in another post