Talakadu and Shivanasamudram and more on a day trip from Bangalore

Within 150km radius from Bangalore, Somnathpur is a great place for a day-trip from the silicon valley of India.  It is famous for two reasons –first, the Shivanasamudram falls that is popular among youngsters, and second, the less famous, but way more intriguing – Talakadu, a mini-desert in Karnataka. Somnathpur is in itself famous for the beautiful temples representing the Hoysala architecture.
However, I have been harping about going to Talakadu, a village near Somnathpur ever since I heard the mysterious story of the sand dunes of Talakadu. Chayan wanted to drive longer hence the plan – Talakadu- Shivanasamudram- BR Hills – all in one day. Add to that a delightful coracle ride in Kaveri, and you have the recipe for a complete epic weekend condensed into one-day round-trip.
Don’t forget to read the list of my favorite day trips from Bangalore.

Bangalore to Talakadu – the road trip

We started at 6:15 am from Koramangala (south Bangalore) and picked up our friends from Gopalan at 6:30 am. Covering 9km in 15 minutes on a route that takes 1.5 hours on a regular working day is a positive start indeed. I knew from my research that there was no proper food joint in the area, so we stopped at Kamat as usual to have our South-Indian brunch. For the starters, Kamat, A2B and Saravana Bhavan are the three most popular food-chains in Karnataka and Tamil Nadu, and they are what I like to call, the food authority in the national highways.
Check out our Karnataka Bucketlist to explore the best of Karnataka.

Enter Talakadu – The Legend of the sand dunes 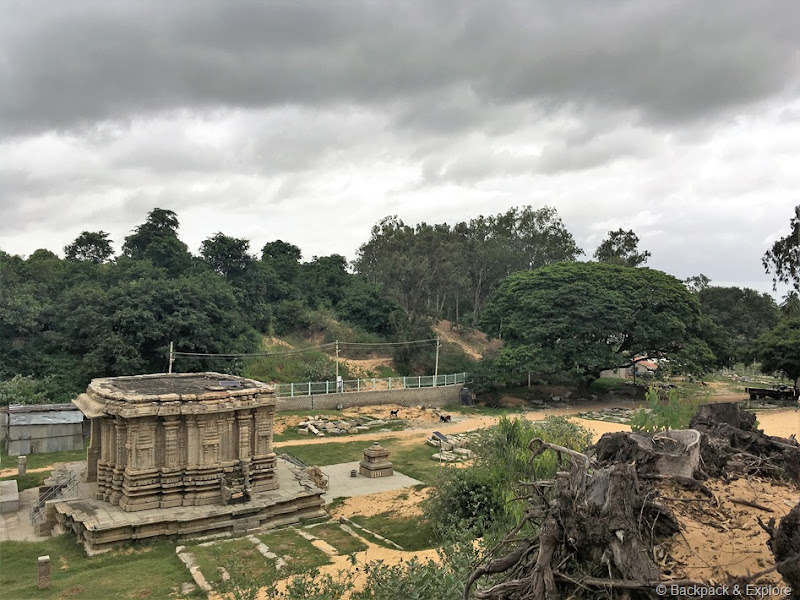 The History and folklore of TalakaduAlso known as the Benaras of the South for a large number of old Hindu temples and their religious significance, Talakadu is an interesting place for the seekers and believers alike. How the river changed it’s course and came to circle around the heaps of sand has been a topic of research about many archeologists and historians for years, but if you ask the common people here, you will get a very simple explanation for this peculiar landscape.
Here goes the folklore-cum-history of Talakadu’s sand:
Four hundred years ago, the Mysore kingdom was a part of one of the most prosperous empires in the world – the Vijayanagara empire. Srirangaraya, the king of Mysore (let’s call him Sri) fell sick due to herpes and came down to Talakadu to pray in the Lord Vaideshwara temple. Vaideshwara, which means doctor in Sanskrit, is the Hindu God of medicine. Sri did not survive and the throne was taken over by Raja Wodeyar (call him W), the ancestor of the present royal family of Mysore.
Sri’s wife Alamelamma (let’s call her Ala), was a pious woman who used to decorate the idol at the royal temple with her own jewelry. After the king’s death, she left the capital and settled in the village Malangi near Talakadu. Talakadu was a great pilgrimage site then. Now W ordered for all the ornaments of Ala, be snatched from her by force and sent to the capital, to which she denied. When the forces marched towards Malangi she packed all her ornaments in her sari and jumped into the river Kaveri uttering three curses-
“Let Talakadu become a desert of sand
Let Malangi become a whirlpool
Let the Kings of Mysore go without progeny”
Raja Wodeyar felt sad after hearing the news and made an idol of Alamelamma and decorated it with special ornaments. Even to this day, the pooja (worship) of Alamelamma is performed at the Mysore Palace during Dusshera. Whatever be the truth behind the story, half of Talakadu was buried in the sand, the Wodeyar family did not bear children and they continued the lineage by adopting from close family.
(source: – wiki, tourism booklet, and many other resources)
According to geologists, in the 15th century, a boulder dam was created to slow down the Kaveri river and divert the flow to nearby villages. As a result, the sand from the river deposited on the banks at Talakadu. The lack of heir in Wodeyar family is often explained by marriage between close relatives. None of these scientific explanations are fool-proof, so even in this age, the legend of Alamelamma lives on as the most popular answer to the riddle of sand dunes.
Check out the best things to do in Mysore in our travel guide to the royal city.

What to do in Talakadu

About thirty old temples of Talakadu are buried under the sand that forms a hillock which the river Kaveri has encircled from three sides. In 1960,  the government tried to prevent the distribution of sand by growing big trees on the sand. Many of these temples were excavated from under the sand and rebuilt but they continue to be buried during sandstorms. The place is still a famous pilgrimage site for the Panchalinga Darshana – the sight of 5 Shiva temples. However, this occasion comes after a gap of several years when all the five temples are freed from sand and are open for pooja. I am not a believer, but history intrigues me and I went to Talakadu for the love of old architecture and the natural view from the hillock.
As we navigated to the interiors with google maps, a matured man stopped us and offered to be our paid guide. Our guide quoted Rs.300 for a tour of the temples which we didn’t bargain. He showed us some of the rooms inside the temples that are locked for visitors otherwise. Personally, I was expecting to know some history, like some trivia about who built the temple, if not the architect at least the name of the king of commissioned it (unfortunately the name of architects are not very well-documented in the history of monuments in India). The guide, however, focused on the Gods and the Puranic importance of this place in broken English and Hindi. I think a combination of both is important for a place which happens to be an age-old pilgrimage site. Our friends are more religious than us for sure and quite evidently enjoyed the Puranic stories of the place. We ended the tour on a high note with a fun-filled coracle-ride in the river Kaveri. Thanks to the light monsoon, the weather was fabulous and the river was at her brimful best. 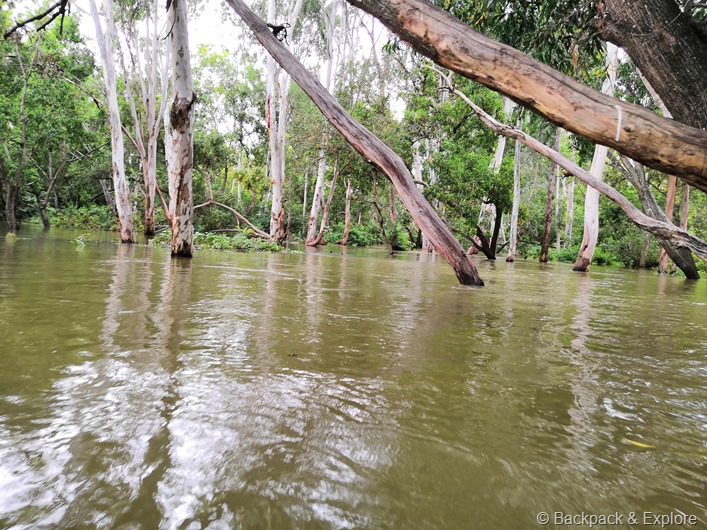 Enjoying the glorious weather and spectacular views on our coracle ride

Shivasamudram – The Island of Waterfalls 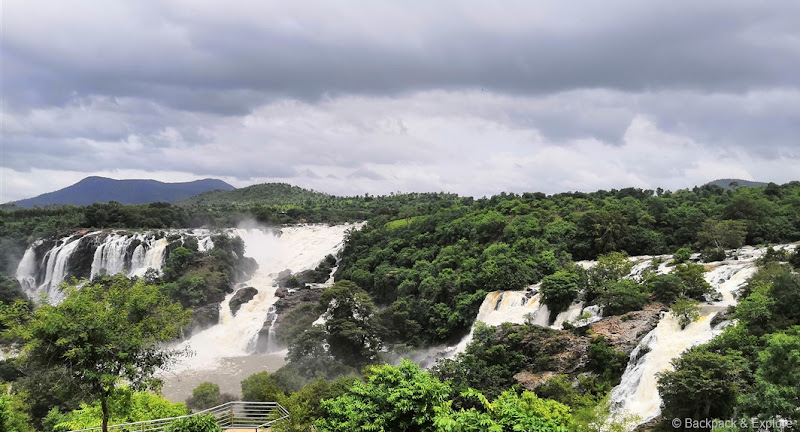 Our next stop for the day after the amazing coracle ride was Shivanasamudra, the island town of Mandya district in Karnataka which is the home to two beautiful segmented waterfalls – the Barachukki falls and the Gaganachukki falls. Together, they are both called Shivanasamudra Falls.
Shivanasamudra is the island formed between the two branches of the river. It is also the location of India’s second hydro-electric power project. The two waterfalls Barachukki and Gaganachukki formed from the Cauvery river lies few kilometers apart here. There were some pleasant views on our way –  vast stretches of paddy fields, the mountains at the backdrop, the river Kaveri and the old footbridge. Many tourists walk on the old bridge for some mesmerizing views of the river, dam and the hills. 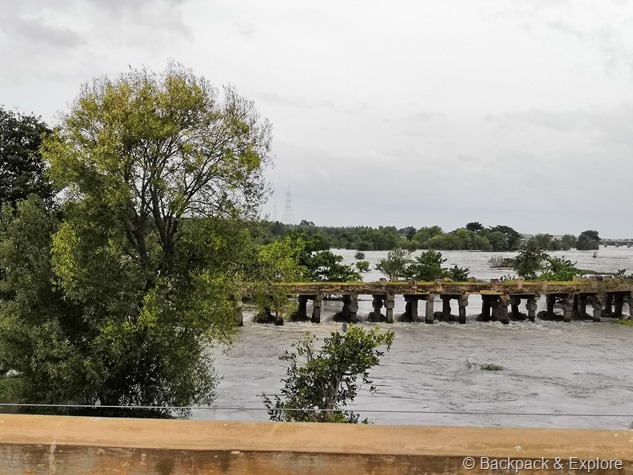 The old bridge as seen from the new modern bridge

But hold your breath, as you are about to see one of the 50 most beautiful waterfalls in the world. We were fortunate to witness the Barachukki falls at its full glory after eight years during the monsoon this year. This owed to the combined discharge from the Kaveri and the Kabini reservoirs in excess of 1,00,000 cusecs. The mist formed due to a wind blowing over the gushing waterfalls lends an ethereal look to the waterfall.
There are beautiful stairs for the tourists to safely step down to the bottom of the waterfall but after some accidents caused due to the negligence of tourists, the entry is now closed. The watchtower is the best place to get a panoramic view of the falls.
Apart from this natural wonder we also saw two of the three Ranganathaswamy temples at Shivasamudra. As mentioned before there was no good place to have lunch, so we ate some bhel (puffed rice mixed with spices, chopped onion, and cucumber), coconut water and freshly prepared sugarcane juice. 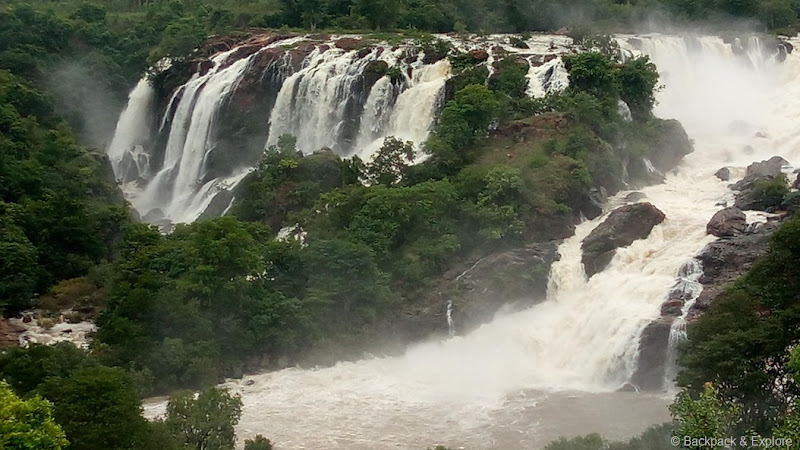 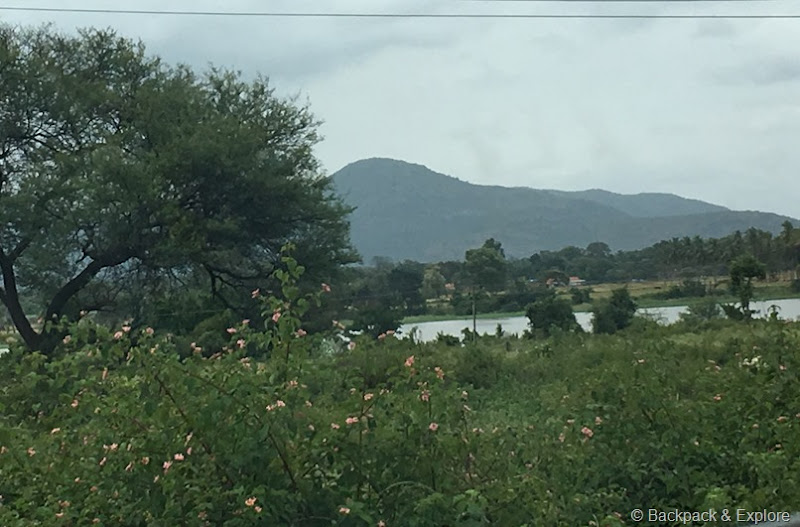 It was already 3 pm now, we had to take a call whether we should return to Bangalore or head towards BR Hills. Chayan (my husband) was eager to drive more so we drove towards BR Hills. This hill is famous for the Biligiranga temple atop the hill and the wildlife sanctuary leading to the temple. It is the eastern-most edge of the Western Ghats of India standing at the border of Karnataka and Tamil Nadu. This place was a nature-lovers paradise. It has recently been declared as one of the tiger reserves in the Western Ghats. So, if lucky you can spot the striped beauty among other wild creatures like sloth bear and sambhar.
We caught a fleeting glimpse of a Sambhar running into the depths of the jungle. We also saw some monkeys as usual and a large tortoise. We were getting late and being aware of the traffic in Bangalore, we didn’t wait much longer in the forests. 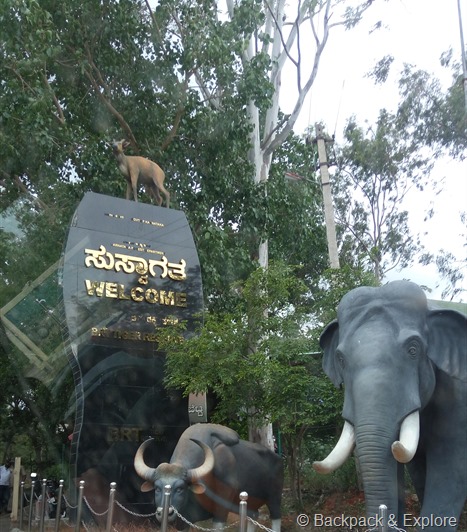 So that’s about it. We went on our way back to our usual traffic-ridden, pollution-inflicted city life, looking forward to another weekend in the wilderness.

Check out the photo story of our trip on our Facebook Page
Read more about our weekend escapades from Bangalore city.
If you like what I write, Subscribe to my blog to be notified of new travelogues and detailed travel guides every week. Don’t worry about spam, with my full-time job and travels, I cannot send you more than 1 mail a week. You can also follow me on Facebook and Instagram for your daily dose of wanderlust.
Like it? Pin It!👇 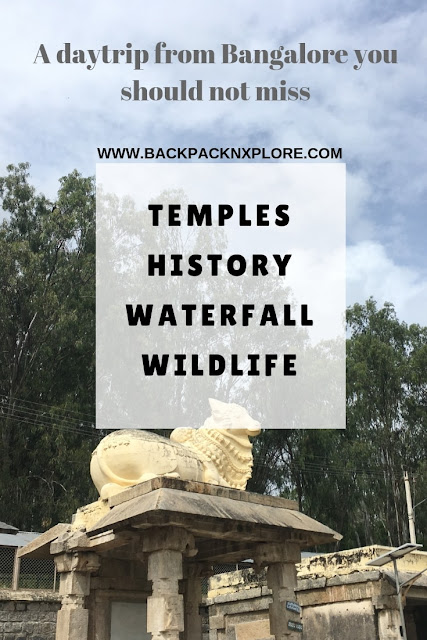 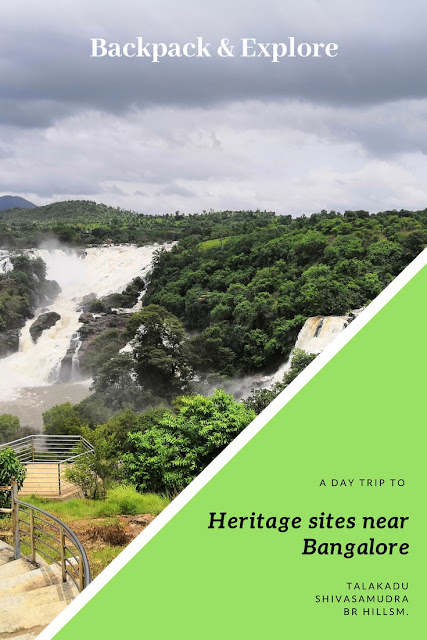 Have you been to Karnataka in India? What was your favorite place? Share with me in the comments.
Archived Comments from Google Plus
Tags: